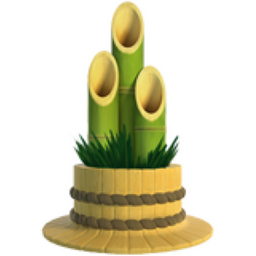 A Japanese pine decoration, called a kadomatsu, is placed in Japanese homes, traditionally in the door way, during the period around New Years. A welcoming sign to ancestral spirits. A blessing for a plentiful agricultural harvest. Traditionally a respectful and welcoming emoji. A symbol of good luck and fortune. Sometimes the cultural significance of this emoji is disregarded and is instead used for its likeness to a middle finger hand gesture. Raising a middle finger at someone (flipping them off) is a sign of extreme disrespect.