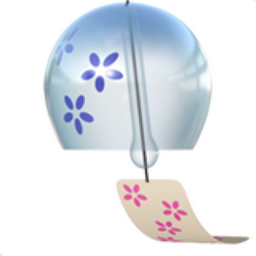 A wind chime is an instrument or object designed to make sounds or play music when the wind blows. A music instrument played by the wind. This particular wind chime is a Japanese glass wind bell, called a Fūrin. The hanging card provides something for the wind to push against. Some believe that wind chimes scare away evil spirits. A spiritual, protective and soothing emoji.

A wind chime with a message attached on it. Probably an ancient proverb. It's a wind bell!