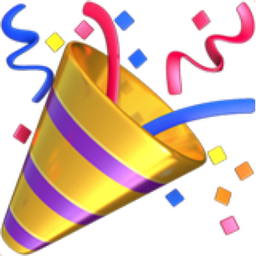 A party popper is a small hand-held explosive devise that, when triggered, sends colorful confetti and streamers into the air. An item used to heighten the climax of a celebratory event. This emoji is used on New Year's Eve, Independence Day, and generally when accomplishments are being recognized, special announcements are being made or a victory is won.