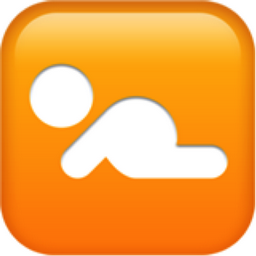 = baby on board, baby changing station

It's a baby! A newly born human. Very small in size when compared to a full grown adult human. Babies are often associated with crawling (moving around with hands and legs touching the ground), since they are still learning to walk on two feet. Babies are also associated with diapers (underwear specially designed to absorb and hold poop and pee), since they are not potty trained.