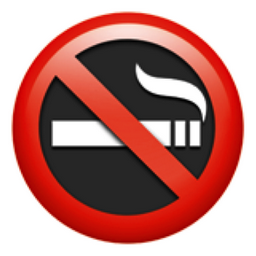 A lit cigarette with a "no" symbol on it. Many places ban (forbid) smoking, such as airplanes. Although, that wasn't always the case. Smoking is an expensive activity that is considered a bad habit because it is highly addictive and terrible for your health. Surgeon General's Warning: Smoking causes lung cancer, heart disease, emphysema and may complicate pregnancy. Stay away!

A blue icon which shows a cross though a cigarette smoking. No Smoking.