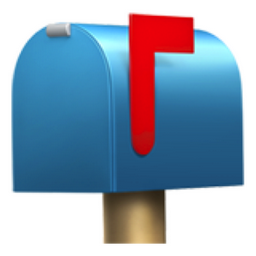 A closed mailbox used to hold letters and packages. This particular mailbox has the flag up, which means there is outgoing mail in need of pickup by the postal worker. The door is closed on this mailbox.

The flag is up on this mailbox to identify there is outgoing mail waiting. In iOS 5 the mailbox magically closed. iEmoji old name: Blue Mailbox.