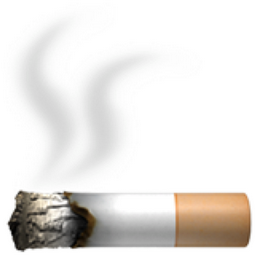 A lit cigarette. Smoking is an expensive activity that is considered a bad habit because it is highly addictive and terrible for your health. Surgeon General's Warning: Smoking causes lung cancer, heart disease, emphysema and may complicate pregnancy. Stay away!

A cigarette which is lit on a white background. Updated image in iOS 5 to make cigarette look less appealing. Go Apple! :w