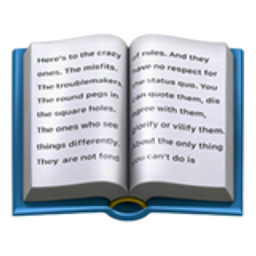 An open hard-back book. This emoji could be any book, such as a textbook or a cook book. A fiction (not real) or non-fiction (real) book. The Apple version is blue with the text from Apple's "Think Different" advertising campaign and reads: "Here’s to the crazy ones. The misfits. The rebels. The troublemakers. The round pegs in the square holes. The ones who see things differently. They’re not fond of rules. And they have no respect for the status quo. You can quote them, disagree with them, glorify or vilify them. About the only thing you can’t do is." A favorite emoji of book worms everywhere (people that love to read).