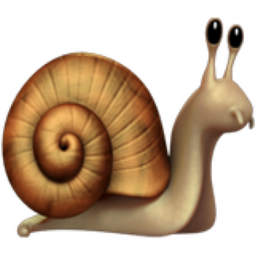 • fifth of the signs of the Asian zodiac, used in Kazakhstan

A snail is a small creature that are typically thought of as having a spirally-shaped shell. Snails move very slowly. The well known speed characteristic of a snail makes this emoji a popular choice when someone or something is taking a long time. Escargot is French for snail. Cook garlic, butter and snail and you have a French appetizer, escargot. Bon appetite!