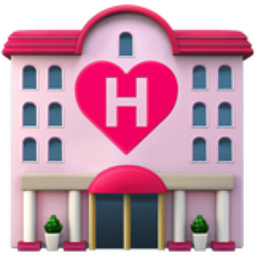 A love hotel is a place where people can pay money to rent a room and gain privacy for a short period of time. A place to have sex, typically with discrete ways to enter and exit. Used by prostitutes, lovers, or people committing adultery (sex outside of marriage). Despite its official meaning, this emoji is more frequently used as a hospital given the large "H" displayed on the side of the building. An "H" is commonly used on maps and street signs to mark the location of a hospital. When used as a hospital, generally used to convey a positive emotion, such as a loved one getting well enough to leave the hospital or the birth of a child.

Usually "Japanese Love Hotel" what? You don't know what a love hotel is?