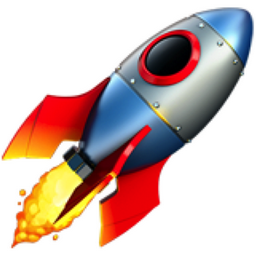 A rocket is used to fly and push something through the air. The fins on a rocket help keep it stabilized and headed in the correct direction. Fuel is pushed out the back and ignited (burned) to propel it forward. Large powerful rockets are used to put people and objects into space. National Aeronautics and Space Administration (NASA) uses rockets at the Kennedy Space Center. Blast off. To the moon! As Buzz Lightyear once said, "to infinity and beyond."

This Spacecraft is equipped with a working red rocket engine.