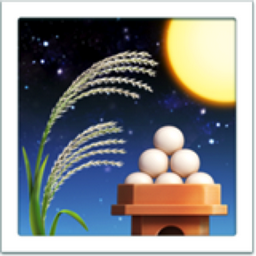 The moon viewing ceremony is a Japanese tradition of honoring a full autumn (harvest) moon. In honor of the moon and a plentiful harvest, food is displayed for the moon, an offering of appreciation and respect. It is common for rice dumplings (Tsukimi dango) and Japanese susuki grass to be offered. A beautiful moon.