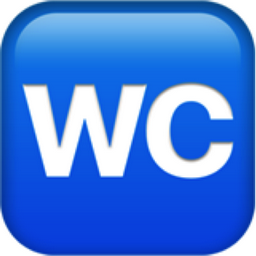 A symbol for Water Closet (WC). An English way to say bathroom. Indoor plumbing, which delivered water directly into a building through pipes, is relatively new and many houses were built before indoor plumbing was well established. When older homes were updated (remodeled) to include plumbing, a room in the house needed to be picked and converted to include water. Closets or small rooms were often selected, and thus came the term "water closet" to literally mean a closet with water plumbed into it. The pipes would run to sinks (a small basin for catching water), bath tubs (a large basin for holding water), toilets (a place to dispose of human waste) and showers (a place to stand under a shower of water).

An icon with a blue background and the letters 'WC' on it. European for bathroom!