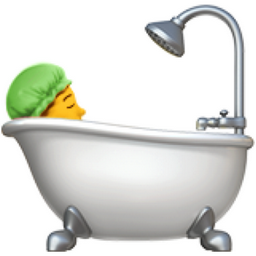 A person in a bathtub. Known as taking a bath. People take baths to get clean. A bath is a large basin used to catch (hold) lots of water. Children often prefer a bath to a shower since the water does not shoot out from above and get into their eyes. A claw foot tub, a large water basin sitting on four feet, is the easiest way to identify a bath, although they are not as common as they used to be.

A man taking a bath in a tub. The tub also has a shower fixture. Old name: Man in Bath