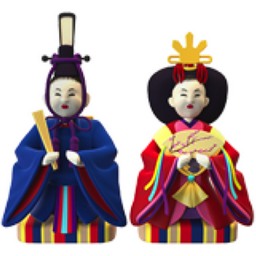 The Japanese Dolls emoji is a symbol for the Hinamatsuri (Girls' Day or Doll's Day) in Japan. Ornamental dolls representing the Imperial Family in traditional attire. The dolls include the emperor, empress and the people that typically surround them (the royal court). Celebrated on March 3rd, Doll's Day is the day to pray for young girls and their well being. Doll's Day is not considered an official holiday of Japan.