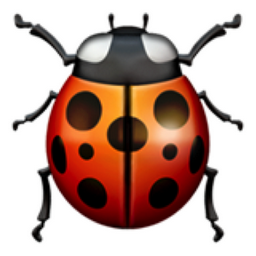 A lady beetle, also commonly called a "lady bug", is a small six legged insect that can fly. Many lady bugs are easily recognized by their red and black spotted wing covers. People, especially children, love lady bugs. It is said to be good luck if a lady bug lands on you. Lady bugs eat aphids (a very small insect) that can infest plants. It is not uncommon for people to buy a bag of lady beetles from the store and release them into the garden, particularly when a garden has a significant amount of aphids. This emoji is often used to communicate endearment.