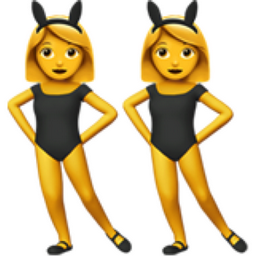 A woman with bunny ears on her head. Bunny ears are commonly associated with being a "showgirl" or a woman that provides entertainment to others by dancing and singing (putting on a show). The Apple version emoji includes two women dancing and is frequently assumed to mean synchronous dancing or just "dancing" for short. However, given its official name and meaning, Apple most likely intended the woman to be doing the Cancan (Can-can). A potential for miscommunication when sent to an Android, LG, or Samsung smartphone user. What means synchronous dancing to some is displayed and interpreted as costume, showgirl, or playboy bunny to others.