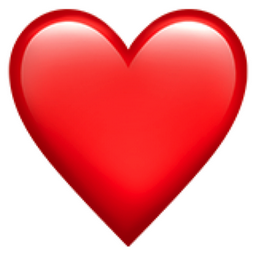 Officially named "Black" heart but often displayed as a red or pink heart. Red and pink are the most traditional colors used for a heart, largely because the human heart is red in color. A heart is used to symbolize the emotion of love. Humans have long associated the feeling of love with the heart. The symbol for Valentine's Day is a heart. A red heart is used to symbolize love, passion, and romance. Intense desire. This particular emoji can be confusing in that it is officially named a "black heart" but is displayed as either red or black. A black heart has a completely different meaning from a red heart. A black heart is often associated with death, evil, or being emotionally cold (without compassion, feeling or love). Generally, however, this emoji takes the form of a red heart.

The symbol for love <3