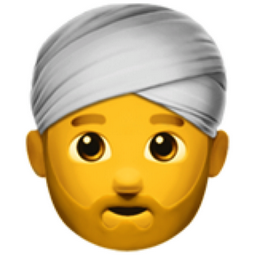 An man with a turban on his head. Commonly assumed to be a man from India despite the fact that turbans are worn in many other locations. A turban is a type of headwear (headdress) that involves wrapping the head with cloth. A white turban is often associated with wisdom and peace. This emoji may be considered politically incorrect in some locations, such as America. Sometimes used to communicate a mummy, given that part of the mummification process includes wrapping the body in bandages. A popular emoji during Halloween (All Saint's Eve).