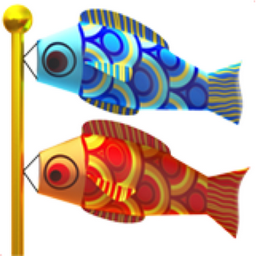 Carp streamers (koinobori banners) are flown on Children's Day in Japan, a national holiday. The holiday was originally a celebration of boys and is still sometimes referred to as "Boy's Day." Boys and girls are now celebrated on Children's day. A carp is a type of fish that typically swims and feeds at the bottom of a body of water. The largest carp (fish) streamer is meant to symbolize the father, the medium carp the mother, and any smaller carp the number of children in the household. A celebration held on May 5th for children and those that take care of children.

Usually made of cotton these are brightly colored wind socks that are usually flown on May 5th of each year, Japanese Boy's Day.