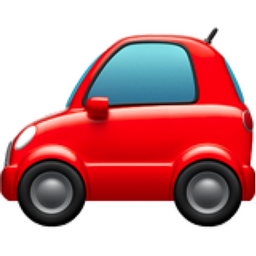 The side of a car or automobile. A car is used to transport people from one place to another. Sports cars typically hold two people and larger sedans five people. There are many different types of cars made from many different automakers, such as Ford, Chevrolet, Kia, Toyota, Nissan and Honda. The United States, Japan, Germany and South Korea make many of the world's cars. German engineering is well regarded when it comes to luxury automobiles, as demonstrated through BMW, Audi, Mercedes and Porsche.

Looks like a fast red car with two doors but the little antenna coming out of the back of it is a little unnerving.