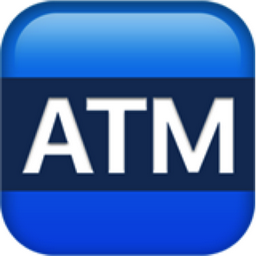 An Automated Teller Machine or ATM is a device that provides people access to their bank account without the assistance of a human bank teller. An ATM is typically used to deposit or withdrawal money (cash) from a financial account, such as a checking or savings account. Most banks have at least one ATM attached to the bank so that people can make routine transactions 24 hours a day. Most ATMs will charge you a transaction fee if you are not a member of the bank that owns the ATM. The joke in Las Vegas is that the only sure bet for getting more cash is from "Adam" or the ATM. Also used to mean "At The Moment", getting cash, pay day, or man's name Adam.

This familiar symbol is recognized around the world as a place that has a device that secretes raw power. iEmoji old name: Automatic Teller Machine.