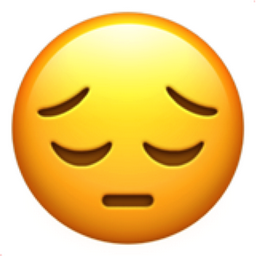 A face with short straight-lined mouth, closed eyes, and inverted curved eyebrows. This emoji has a lot to think about, likely something rather serious. It is often best to give this emoji a little time by itself to fully contemplate and resolve its thoughts.