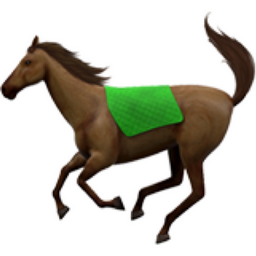 • seventh of the signs of the Asian zodiac

A horse is a magnificent and powerful animal that has been used and loved by people for centuries. Horses are considered a draft (work) animal and have historically been used for transportation and to move or pull heavy objects, such as on farms. Horses have also been used to aid people in warfare (cavalry), police work (riot control), and cattle farming (rode by a cowboy to "round up" the cows). A cowboy wouldn't be a cowboy without his horse. Same is true for a cowgirl!

It is a horse, but, I originally thought it was a dog running at full speed with a green racing jacket. It's a beautiful horse, but I kinda wish it was a dog. iEmoji old name: Racing Greyhound Dog.