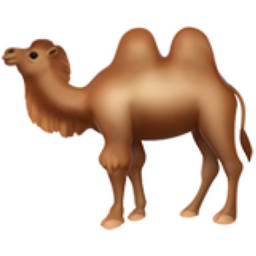 A camel with two humps from Central Asia. Bactrian camels have one hump and dromedary camels have one hump. Camels are mammals that are native to warm climates. The fatty hump of a camel helps it store and regulate its water needs, which allows it survive in the heat with long distances between watering holes.

This emoji is sometimes used to communicate smoking cigarette, after Joe Camel and the Camel brand cigarette. Can also be used on Wednesday as "hump day", the day in the middle of the work week, or as a synonym for sex or "hump."