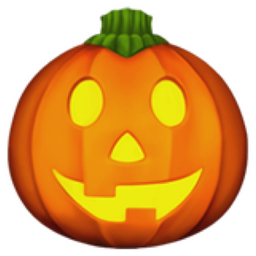 A pumpkin is a giant orange fruit that grows on a vine and ripens in the fall (autumn). The pumpkin is ideal for craving because of its size and large hollow cavity. A jack-o-lantern is a pumpkin that has been carved, typically with a face, and placed in the dark with a lit candle on the inside. Jack-o-lanterns are often made in celebration of Halloween (All Saints' Eve), which is a holiday held on October 31st to honor those that have died. A spooky emoji and the symbol for Halloween.

A carved pumpkin with a light inside. Associated with the Halloween holiday and named after the strange light that appears over peat bogs.