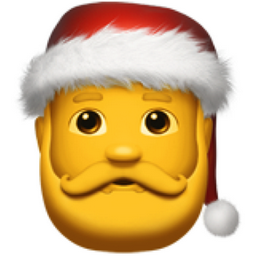 Father Christmas, also known as Santa Clause, is a jolly old man who lives at the North Pole and delivers presents to children during the night between Christmas Eve (December 24th) and Christmas Day (December 25th). A magical man with a jolly laugh, a red button nose, and a passion for cookies and milk. Santa rides around the world delivering gifts and love to those that believe in the spirit of Christmas. Known for traveling on a sleigh pulled by flying reindeers. A magical and wondrous emoji. The spokesman for the Christmas holiday and, to some degree, Coca-Cola (Coke).