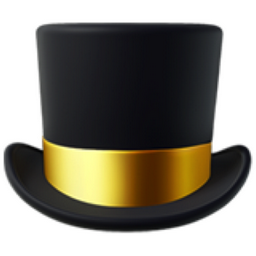 A top hat is a head accessory worn by men and was at the top of its fashion in the mid 1800s to early 1900s. Abraham Lincoln (Honest Abe) was the 16th President of the United States and was known for wearing a stove pipe hat (top hat). A top hat is associate with acting, drama, theater, and the performing arts. It is also associated with magic due to the stereotypical trick of a magician that involves magically pulling a rabbit out of a seemingly empty top hat. A must-have accessory for any London-based period piece, such as Oliver Twist by Charles Dickens.

A black top hat with a gold stripe around it.