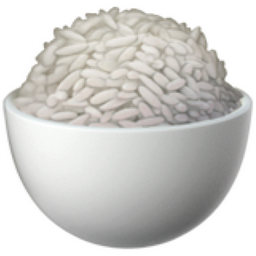 A bowl of plain white rice in a white bowl. White rice is a grain and is commonly cooked in a rice cooker. Sticky white rice can be served up with a large deep round spoon, which can give it a dome appearance on top. Rice is one of the world's most prevalent sources of calories (fuel for the body). A little bland by itself, but mixed with spices and other flavorful food and an amazing meal is born.

Plain bowl of white rice in a white bowl. The rice has been rounded food, which is always cool.