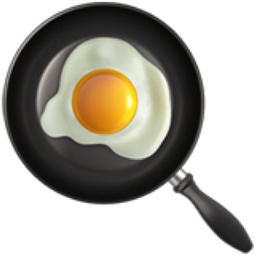 The act of cooking food. To heat food up before eating it. Many foods taste better when cooked. In addition, cooking food to the proper temperature can help keep you from getting sick by killing harmful bacteria found in some foods, such as meats and eggs. The Apple version emoji includes a frying pan and an egg in the process of being cooked sunny side up. Some versions of this emoji may also include a cooking utensil. "This is your brain... This is your brain on drugs... Any questions?"

An egg that was just opened. Now cooking sunny side up. This is the emoji for cooking. iEmoji old name: Opened Egg (Cooking)