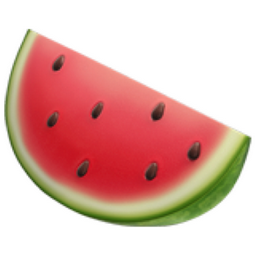 A very large fruit that grows on a vine and is full of water. A summer picnic isn't complete without a watermelon. As counterintuitive as it is, eating watermelon is supposed to help with water retention in humans. People used to sit on their patio on a hot summer day and compete to see who could spit the watermelon seeds the furthest. However, this tradition is dying out due to science and the creation of the seedless watermelon. Nothing to spit, but undoubtedly easier to eat. Many fruit candies come in watermelon flavor.