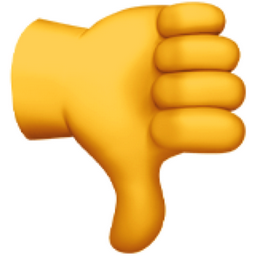 A thumbs down sign is used by humans to say everything is not good. A fist with thumb pointing straight down towards the ground. A hand sign for disapproval or no good. I don't like that. Bad. The opposite (antonym) of a thumbs-up sign. Potentially used for centuries by people, such as during the days of the Roman empire and the gladiators in the Colosseum (Coliseum). Audience members and potentially Caesar would use the thumbs down gesture to indicate a bad performance or outcome of an event. A very negative emoji.