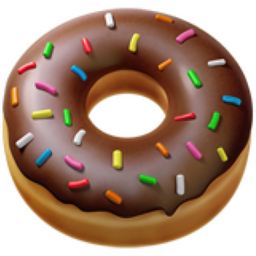 A doughnut (or donut) is a sweet dessert food. Despite being a dessert food, it is most often eaten in the morning, especially when combined with coffee. A traditional doughnut has a hole in it and is made by taking dough and forming it into a ring. The ring of dough is then fried in hot oil. Once cooked, toppings are added, such as sugar glaze, frosting (chocolate or maple) and sprinkles. Some doughnuts do not have a hole and are instead filled with crème, custards, and fruit jelly. Dunkin Doughnuts and Crispy cream are well known and popular doughnut makers in the United States. A United States stereotype is that police officers love doughnuts and are routinely found at doughnut shops when on shift. Homer Simpson was also famous for loving doughnuts.