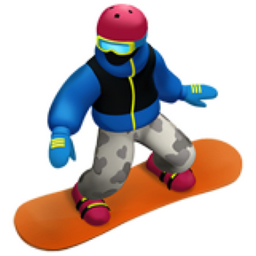 A person on a snowboard. Snowboarding is a relatively new sport that exploded in popularity during the 1980s and 1990s. Mountain resorts (locations dedicated to the facilitation of downhill snow activities) used to be enjoyed primarily by people on snow skis. This has changed dramatically since the creation of the snowboard. The amount people on snowboards grew exponentially in the 1980s and 1990s. This exponential growth caused Snowboarding to be an official Winter Olympic Sport in 1998.