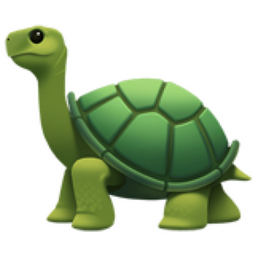 A turtle is a reptile that is best known for its hard protective outer shell. An animal that is slow moving, lays eggs, and snaps food (plants) with its mouth. Unlike some animals that live in a shell (hermit crabs), turtles cannot come out of their shell because it is part of their body (think fingernail). This emoji can be used to communicate slow and steady, that you are a Teenage Mutant Ninja Turtle, or simply that someone has something to communicate about a turtle.

Being slow and steady can be a good thing. In the children's story, The Tortoise and the Hare, the tortoise won the race despite his saunter.