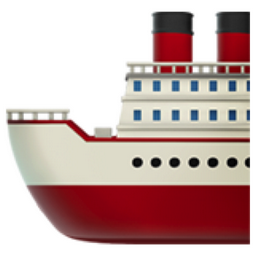 The side of a ship. Ships are much bigger than boats and must be big enough to carry a boat (think lifeboats on a Cruise Ship). The Titanic was a ship and was deemed "unsinkable" before it sank on its first voyage across the Atlantic Ocean. It hit an iceberg and people were forced into a freezing ocean. The Titanic did not have enough lifeboats for everyone on the ship.

A rather nice looking Cruise Liner vessel with two funnels.