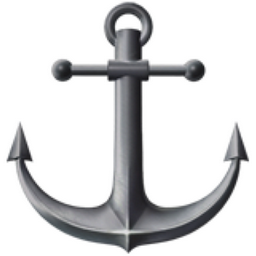 An anchor is used to hold a floating vessel (boat or ship) in one place. A heavy weight attached to a boat with a chain that is thrown into the water (overboard) until it hits the bottom of the body of water, such as the ocean floor. A navigational symbol for a marina, harbor, or shipyard. A stereotypical tattoo found on a sailor, such as the cartoon character Popeye the Sailor Man.

Why is the boat so sluggish and won't pick up speed...?