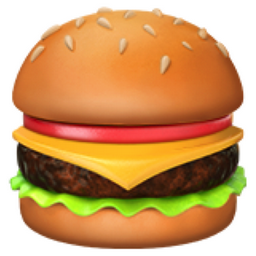 A hamburger is a sandwiched made with a patty of cooked ground beef and served between two buns. A misnomer in that it is not made from "ham" but rather beef. Hamburgers are sometimes served with cheese, which makes it a cheeseburger, such as the Apple version of this emoji. Hamburgers are often served with lettuce, tomato, onion and ketchup, but a gourmet burger may include pepper bacon, blue cheese, grilled onions, sautéed mushrooms, and other more sophisticated toppings. An American favorite food. Used to mean fast food.

A perfect looking cheeseburger with a nice round bun.