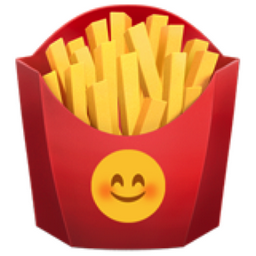 French fries are made by deep frying potatoes that have been cut into long thin pieces. The Apple version emoji French fries have a striking resemblance to a McDonald's red and yellow French fries basket. People eat French fries plain or by dipping them in condiments, such as ketchup, ranch dressing and mayonnaise. Want some fast food, send this emoji to a friend and follow it with a question mark, they won't mistake your meaning.