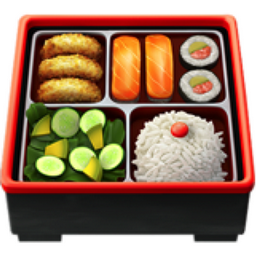 Bento is a Japanese meal that is convenient to package and eat. Similar in concept to a television (T.V.) dinner found in the United States. However, with no reliance on a microwave. Bento is often served in a box-shaped container (hence the name bento box). A simple bento box contains rice, a meat, and vegetables. Inexpensive bento in the United States often comes with white rice, sesame seeds and teriyaki flavored chicken.

A box of bento. Wikipedia: A traditional bento consists of rice, fish or meat, and one or more pickled or cooked vegetables, usually in a box-shaped container. An elegant square display of sushi and all the sauces. iEmoji old name: Sushi