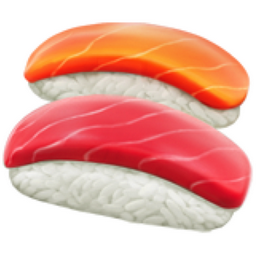 A Japanese food often made with rice, nori (edible seaweed), raw seafood, cooked seafood, and vegetables. Sushi is often characterized as being raw fish, but not all sushi contains raw fish. The cucumber roll is an example of sushi that is made with only cucumber, nori, and rice. The California roll is a favorite in the United States and is made with imitation or real crab, avocado, cucumber and rice. Popular sushi condiments are soy sauce, wasabi (green and horse radish hot) and ginger root.