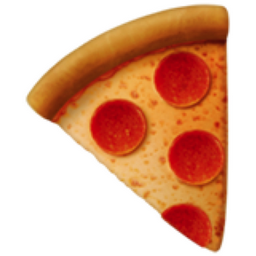 A pizza is sometimes referred to as a "pie" and was invented in Italy. A savory (salty and spicy) pie. A whole pizza is circular (round) but when served, it is generally cut into eight or more pieces. A pizza is made with dough that is customarily spun in the air until it is flat, thin, and round. The dough is then covered in tomato sauce and covered with cheese and other toppings before it is baked to cook the dough and melt the cheese. Cheese and pepperoni pizzas are the most common and popular pizzas. The Apple version emoji shows a pepperoni slice of pizza.