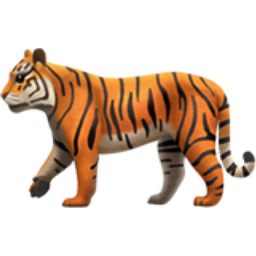 • third of the signs of the Asian zodiac

A tiger is a very large wild cat found in naturally Asia as well as many zoos around the world. Tigers are easy to recognize by their striped fur. Unfortunately, the tiger is an endangered species (a likely or soon to be extinct species) with less than 5,000 wild tigers left in the entire world. This emoji can be used to communicate "go get 'em, Tiger", which is colloquial way to give someone encouragement to do well in something they are about to do. World's most famous cartoon tigers: The figurehead of Frosted Flakes - Tony the Tiger, Hobs from Calvin and Hobs, and Tigger from the Winnie the Pooh stories.

Can be used to communicate being on the prowl… Think sexy tiger growl. Most famous saying by a tiger… "They're great!"