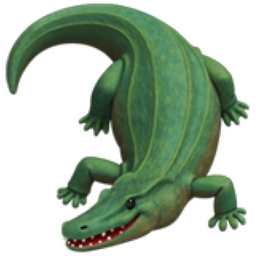 • fifth of the signs of the Asian zodiac, used in Persia

A crocodile is a reptile that lives in or around water. A crocodile's most striking feature is its large toothy mouth. Referred to as a "croc" for short. Similar in appearance, but biologically different, to an alligator (gator). Feeling a little cranky, this is the emoji to use, nothing like a pithy way to communicate being a cranky crocodile. The most famous fictitious crocodile is the croc from Peter Pan. Captain Hook lost his hand to the chomp of a crocodile and has ever since run from the ticking sound of a clock stuck in the crocodile's stomach. Tick tock tick tock.