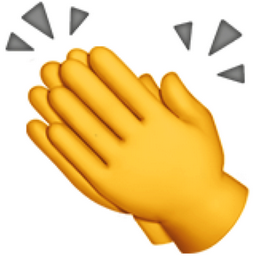 Clapping is the act of slapping the palm of both hands together to make an audible sound. People clap hands when they want to signal amusement, appreciation, encouragement, or excitement. The audible sound of an audience clapping is craved by performers. A sign that hard work or skill is appreciated. A positive acknowledgement of being entertained. People also clap hands to make music or to the timing of music.