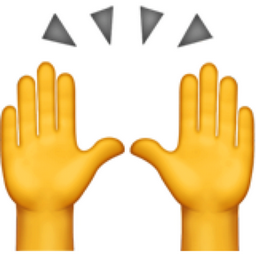 Two hands raised up in the air in celebration or excitement. Woot! Raising both hands in the air when others are near (particularly team mates) is a way gesture "give me ten." A high five occurs when two people slap a single hand. A high ten, commonly called "give me ten", is when two people raise both hands and slap them together. Occurs when something very positive has occurred and is typically observed when watching sports or other games played by people.

Raising both hands. Banzai! Winning. (wow, lots of winning emojis we have!) iEmoji old name: Chinese Finger Trip Got My Thumbs. (wow, terrible guess lol) This is an image of the well known trick the Chinese have mastered putting your thumbs in a device where it is painful to remove them without patience or help.