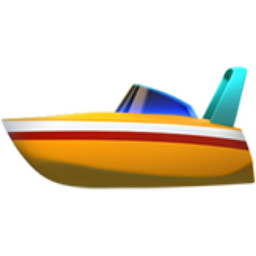 A boat powered by an engine called a motor boat, ski boat, power boat or speed boat. A speed boats are very fast and can be used to pull people on water skis or wakeboards. Technically though, any boat with a motor on it is a motor boat. Many fishing boats have very small motors on them and do not move all that fast and are not powerful enough to pull a person on water skis.

A yellow speed boat or ski boat about to win a race. It has a flag on the back! Yay! Go go go! Old iEmoji name: Speed Boat