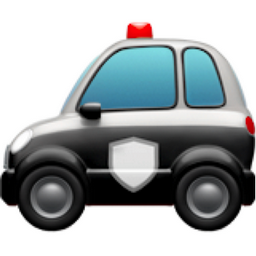 The side of a police car. A police car is used by police officers to get from one place to another. They have lights and sirens that tell other vehicles to move aside when people need help or criminals need capture.

These must be European style cars because they lack the 'oomph' and by 'oomph' I mean they look nimble but probably can't go more than 100kph on open road.