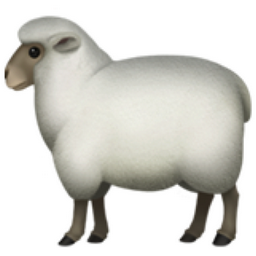 • eighth of the signs of the Asian zodiac, used in Persia

A sheep is a livestock mammal used, in large part, for the wool that they grow. Sheep are sheared of their wool and the wool is used to make items such as clothing and blankets. Sheep are known for staying close to other sheep and not straying from the herd. This is a defensive mechanism. This characteristic of sheep is sometimes used to characterize people that try hard to fit in or that follow other people without thinking for themselves. Someone might say, "don't be a sheep," which mean "stop following other people and think for yourself."

White and fuzzy sheep with all if its wool still on her. An uncommon power animal. iEmoji old name: Baaa Sheep