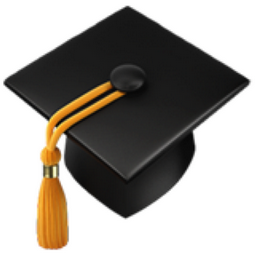 A traditional hat worn by students graduating from a school, college, or university. A mark of completion. Also called a mortarboard cap or square academic cap. A cap with a square board attached to the top. A tassel is attached to the top of the cap. The tassel can be different colors to symbolize the focused study of the student or accomplishments (honors). The tassel may also match the school colors. This emoji is used most frequently in the months of May and June, when most schools hold their graduation ceremonies.